Marina, a very dear friend of mine, who lost her mother some years ago, but who got some messages from her and from her father, who died a while ago, at Easter came to my house to stay for a few days together with some friends. Of course I had them visit my village and some churches! Many pictures were taken and my friend kept on asking me why her mother would never appear in any of them! I went on reassuring her by saying that sooner or later that would happen and then in a picture of one Church finally appeared her mother and other people , like her brother and many other faces, there is even a little angel over her head!

I assure you that the Church was absolutely empty when the pictures were taken, but look what has been impressed instead! 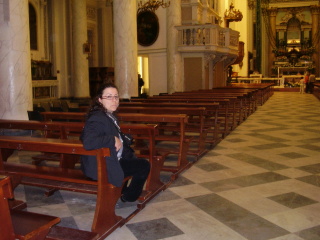 And at the little angel over ’s head

Choose English version in www.leparoledegliangeli.com (the words of the Angels)