The discovery of my Angel meeting Michael

The discovery of my Angel meeting Michael

Since 20th March 2010 I have started smelling a strange odour, a very good, fresh and unexplainable strange scent, It followed me everywhere; first it started to follow me in the bedroom, then all over the flat, and after Easter outside, then at the beginning of May at work; I’m the only one who smells this scent in my family; I can’t smell it when I’m with other people, only when I’m on my own; to tell the truth, I was so frightened, because I didn’t know what it was; could it have been my guardian Angel?.

So after having read on your Site “how to Contact our guardian Angel” I lied down on my bed and I tried to meditate, it was the first week of Augus, while meditating I had seen a male’s face, long, curly hair, but owing to my Angel’s behaviour, who made me open my eyes, I thought it didn’t come from Heaven, and right then I was a bit afraid.

One evening thinking about that face, that is, four days later, I was getting to bed. I had switched the light off, and I was lying on my bed and not even ten seconds later I heard a male voice whisper the name “Michael.” I said “what? , who are you?, what are you?, who’s Michael?”, and He didn’t speak; after calming down, I asked Him to repeat it, to see if I had understood, after a few seconds the same voice repeated the same name, first I thought that the name was connected to the face, and later I had the confirmation, looking at some pictures of the Archangel, Michael, I found a picture of the face I had seen when meditating.

I asked Him to confirm his name and the following day, looking on a Site, where I see my inbox, in ten seconds or even less, I read the name Michael twice, so there’s the confirmation, I was and I am still very happy to have an Angel next to me.

Two weeks later, I said, there were only me and Him at home and nobody else, that my Angel’s My favourite winged knight in shining armour, two or three weeks later I received a registered letter from the Swiss State, the postman had left a note for me to go and collect the letter, and that morning I wasn’t at home unfortunately, in the evening I went to the post office to fetch the letter and they told me that the postman still had it, OK I’ll come back tomorrow, the following day I went to collect the letter and surprise, I read a wonderful thing next to the address, that is, “GREETINGS FROM THE PRINCE”, “SALUTI DAL PRINCIPE” photo, believe me, I was surprised and the woman who was working at the post office that day had seen the writing, I was practically speechless, look at the photo I took. 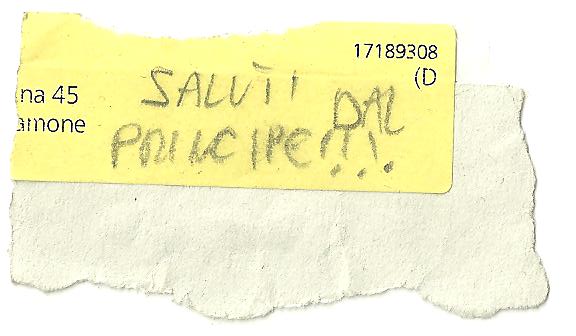 Greeting from Michael and me

The discovery of my Angel meeting Michael are phrases of Dany