Life after death of our pet animals pictures

Life after death of our pet animals pictures

Two years ago I received a phone call at 7 in the morning from Maurizio, a very good friend of mine, he was crying and sounded terrified! I was still half-asleep, I jumped out of bed, I was worried, I did not understand what was happening! Of course I wouldn't, nobody would if they were woken up at 7 in the morning by someone crying, you would worry too!

I asked him what was wrong, I thought that he was not feeling well or maybe he had just received some bad news, or maybe one of his relatives was not feeling well, I had hundreds of thoughts running through my head within the space of a few seconds! Eventually he managed to calm down (it took a while to calm him down) and he told me 'Kikka is dead, Kikka is dead, it's not fair, now what do I do?'

Kikka was his pet rabbit and he was really fond of her, she was born the same day as Maurizio.

After a few months Maurizio decided to buy himself a dog, a cocker spaniel. It was a beautiful puppy to whom I became also very attached! Believe me when I say that all this pet needs is to be able to speak! She imitates us in everything that we do, she must have some of the same food that we are eating too, and every time she sees me she is all excited to see me for at least half an hour!

While she was growing up I noticed a strange thing with the dog, which I often pointed out to Maurizio; it seemed to me that sometimes she played with something that we could not see and very often, when we took her out for a walk, she would hop just like a rabbit! Since Asia (the puppy's name) imitates everything that she sees. I was wondering if she was seeing and therefore playing with Kikka!

My suspicions were confirmed a year later, it was one evening while I was visiting Maurizio in his home! I took several pictures, one after the other, and in one of them you can see Asia and Kikka right next to each other! Maurizio still did not believe it!!! 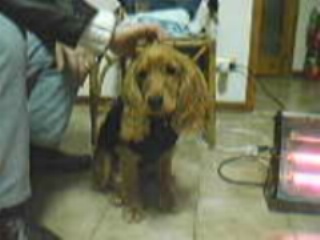 I drew a contour around the shape of the rabbit

Picture and negative films are kept by Peppe