Since many people ask themselves if animals survive death or not, here is another picture for you where you can see a dog! There is no real story attached to this picture, it's only that a long time ago my girlfriend (I covered her face for privacy purposes) lost her dog, Titta, to whom she was extremely attached, she was a little dog that followed her everywhere, she never left her alone! Many years ago Titta died of natural causes. However, even to this date, wherever my girlfriend goes, Titta is always present with her. Two years ago we went for a quick trip to visit a friend of mine; naturally we took a lot of pictures, who doesn't?

Well, in one of these pictures, the one I am sharing with you, you can see myself, my girlfriend and Titta above her head. 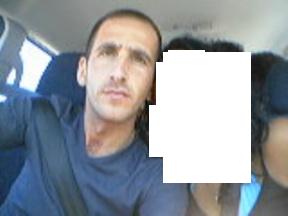 I drew a contour around the shape of Titta

Photo and negative films are kept by Peppe