In January 1999 I was in Alta Badia, in Italy, on a skiing trip with some friends. Before leaving for my holiday, while I was meditating, I had the feeling that, during the oncoming week, I would meet the Angel of the Mountain and I would even take a picture of Him!

I was not able to give a meaning to this thought, maybe it was a compensation for a never truly fulfilled need that I had to feel the presence of my loving Guides of Light who surround me in my life. I felt I had to buy one of those 'disposable' cameras, since I do not own a camera that allows me to take quality pictures, and that I would eventually receive further instructions later on.

One morning, 3 or 4 days into my holiday, just as my friends and I had agreed to go skiing in a location nearby, a Voice inside me told me that this was the day where I had to take my camera with me. And so I did and later on as I was going up a mountain close to the spot we had chosen, immediately before beginning our descent into the valley, the same Voice told me to take a picture and point the camera in a specific direction. I protested: 'But God (this is how I like to call it) there is nothing nice to look at over there!' The order remained firm. 'Take a picture anyway!'. I expressed my doubt one more time, but again the voice expressed the need to take a picture of that scenery. Heavy hearted, convinced that I would have ended up throwing away that picture because it would turn out to be insignificant, I took the picture where I was indicated with much determination and precision. 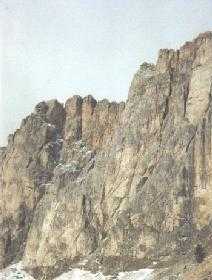 Once I got home, looking at the picture that I took, I did not seem to see anything significant. Only afterward I managed to capture in its entirety what I later coined as the Angel of the Mountain. This was a sign for me, and I understood that it would be the same for other people, too. Of course, all it is, is snow and rock, but, in my opinion, they were distributed in a way that was much too meaningful not to represent the sign that I had been searching for so long!

Picture and negative films are kept by Denis