Images From Jesus And From The Madonna Of Medjugorje Pictures

Images From Jesus And From The Madonna : this is the second part of the Valeria’s testimonial, you can read the first part by clicking on this linkhttp://www.leparoledegliangeli.com/en/angels/3699-dreaming-of-angels-contact-with-the-guardian-angel-in-a-dream.html now let’s continue to listen to Valeria’s testimonial.

Hello Sara Luce! It’s Valeria once again, I write to tell you about some other things that happened to me and to my fiancé Carmelo. The day I had the wonderful dream with my Guardian Angel, I immediately called Carmelo to tell him all about it, he was happy for me and that same day he also went to read the page of your website that helps you get in touch with your own Angel.

He had told his Angel that, after all, he did not have much to ask; he has a nice family, he has me …. The only thing that he could ask was some help to be less anxious about things, and then he added “who knows, if I too will be able to marry and have a family and children … “Then he went to bed and fell asleep … he had a wonderful dream ….

He was in the little Church right across from his house in the country, where we are spending our summer holidays this year, he was attending the Mass service and there were other people; as the Mass was about to end he felt like he was being called outside the Church, he left with other people to go to the little square in front of the Church (this being a Church in the country, the view from this square is dominated by mountains and trees) the sky was an intense orange/salmon color, with the same hues of a sunset, the leaves were caught un in a huge vortex that extended back as far as the eye could see, these leaves were spinning as if they were being pushed up, slowly, even though Carmelo could not feel any wind at all, the air was still and calm.

There was some background music (similar to that of the song “mad world”), only music, no lyrics, he was headed toward the square and turned around and watched the pavement of the square lift up as if it was pushed by a wave, and as it was being pushed up so were the people standing on it, this vision was giving him peace and he thought it had to represent the moment of the passing to the other side … then the wave caught up with him too, he too was being pushed up and would remain up there suspended in the air, all the while feeling wonderful sensations (they were so beautiful that he ended up crying as he was describing them to me) and then he returned to earth, and in the dream he though “I must call Valeria, I have to tell her that all of this really happened!” at that moment a girl approached him in his dream, her hair was dark and curly, this girl (he believes she was his Angel) whispered in his ear “it will happen” and in that moment he woke back up again, and found himself crying and smiling ….

The morning after this dream, he left town briefly, when he returned, while he was driving on the highway, he asked his Angel to send him a sign, for example a butterfly … and immediately after this a butterfly passed right in front of his bike in the middle of the highway!

A few days later a friend of Carmelo’s family gave me a little handkerchief from the Madonna of Medjugorje (I have been wanting to go there for a long time) and I was very pleased to receive it, that night I went to bed and I had a really strange night, I could not sleep, after a long time spent trying to sleep I did fall asleep but then I woke up again …. I do not remember anything from my dream, but I do remember that one concept did remain engraved in my mind, the phrase “The Angels always follow us (Carmelo and me) in our trips”. Carmelo and I are always traveling together by car.

Then I fell asleep one more time, I woke back up again, and this time I remembered the dream I had had, which was that I saw in my hands a brochure for a trip to Medjugorje for 209 Euros, and in my dream I was saying that I had to write this dream down as soon as I would wake up again … I woke up with the feeling that I had been touched or kissed on the face, and I had a shiver that ran my entire body.

Then I found myself in a state of semi-wake, I heard a phrase from a feminine voice, very slowly and calmly telling me “The Angels will guide your hands” and I woke up once again with that strange sensation, and that shiver down my whole body.

The other day I was in my home with my parents and Carmelo, as per my request my nephew had downloaded some songs a few days earlier and that day he gave them to me, and at the same time my father, returning home from work, brought me a picture (which you see attached) that a Priest had brought to one of my two brothers, both photographers, with a request to have it developed, and he explained to them that he it was actually a child who took this picture in Medjugorje, because he had noticed a strange light in the sky … I looked at this picture and … I have no words to describe it …. you will see for yourself and the same will do the people who will read this, if you choose to publish this, in this picture you see Jesus and the Madonna …

After having looked at this picture, I turned the computer on to save the songs that my nephews had brought to me, he had saved them on my father’s memory stick, so I copied and pasted a number of folders, and then I listened to them … the first folder that I found had made me curious because it had no title and I found 14 soundtracks in it, none of the with a title …. all songs about Jesus and the Madonna!!

I had told my nephew to give me a completely different genre of music, he told me that he ha d not downloaded that music, and then he asked my father if perhaps that music belonged to him, and then remembered that it was some music that a colleague of his had given him some time ago after having been to Medjugorje!! A coincidence? I prayed God, Jesus, the Madonna, my Guardian Angel, repeating several times that I was completely happy for all of these events and that if there was something that I was supposed to do, that I would do it happily because I see myself as an instrument of their hands.

I hope I am not sounding delusional here, if you knew me you would understand that I am a person that tends to always explain everything that happens, with rationality … you can imagine, I am a biologist and at a university, and now that I am even specializing in my trade, everything that they teach us is based on the “scientific thought”. A few days ago I was explaining these things to a couple of friends of mine, who are also training to be doctors, how some of these things that had happened, one of them told me that we are men of science and that we tend to rationalize everything, but that not always we can explain with science everything that happens to us …. and so it was, even though I focus on being “critical” when looking at these events, by now I realize that I am doing it more because I place myself in the shoes of those who are listening to all these things, and that perhaps does not understand things because he or she never actually felt them with the heart like I do …. 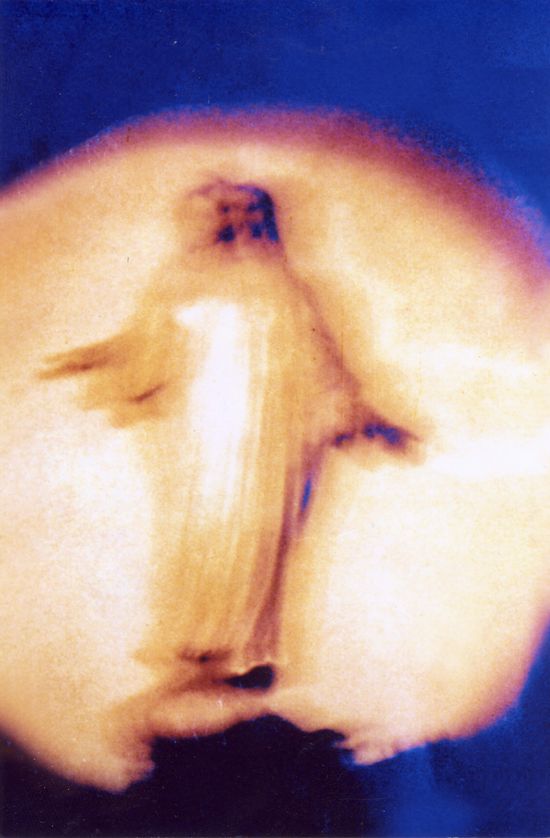 My dearest ones, I am Sara Luce, I asked Valeria to find out more information about this picture of Jesus and of the Madonna, taken in Medjugorje, this is what Valeria told me:

Well, as far as the picture is concerned, I immediately called my brother and asked him to tell me everything he knew about it, he told me that he went to a Priest who had received this picture by someone, we do not know who, I suspect another Priest, and he asked my brother to make a reproduction (scanning the picture and then printing a large amount of copies so that he could distribute them around); my brother said that the original picture would have had much more graphic details, but that unfortunately a reproduced  image lost some definition; if he could obtain the original picture, then the reproduction would turn out of much better quality.

The picture was taken by a little girl who was visiting Medjugorje with her mum, it was not a picture of the sky as we had originally understood, it was a picture taken of the statue of the Madonna located inside the Church of Saint Giacomo (I found out this last bit of information by a colleague of mine who also received the same identical picture from a Priest in her Parish in Palermo. I am from Caltanissetta, so it is fair to say this picture has already gone around the whole of Sicily).

When this girl’s mother went to the local photographer to have it developed (I believe it is in Licata, by Agrigento Italy) the photographer asked the lady if they had taken some shots with an unusual exposure, and the lady replied negatively. The photographer showed her the picture and told her that if this picture really came from one simple camera shot, then he too would start believing!

I just saw the image of the statue from which this picture was taken, among other things the statue has her hands together, where in the picture her hands are opened.

Obviously you are welcome to publish the pictures of Jesus and the Madonna of Medjugorje.

Images From Jesus And From The Madonna Of Medjugorje Pictures