Dear Sara, how are you? This is what happened…. In July we had our wedding anniversary.

In our family it is an affectionate rule to always celebrate happy events, in any way that is possible, however with the problems my brother Danilo has been having (which are not yet resolved) I was feeling more worried than happy. I was rather demotivated and very sad.

After a little hesitation I did invite my close family relatives, a very few friends, I prepared a simple dinner and I laid out the table with simple yet joyful decorations.

We were almost at the dessert when a wonderful firework display began, to be seen perfectly well from our balcony, it was like an honorary balcony to an unexpected wonder.

Fabio, my husband, was taking pictures to immortalize the event. Our friends were jesting and asking how much it must have cost the town, or whoever financed it, to offer us such an incredible program, while the sky was being illuminated by a red crescent of fireworks.

I remember thinking, about half way through the display, that the author of such gift, such a surprisingly well orchestrated gift, perfectly timed, must have come from my Angel Alcibiade…. Yes, of course the world swimming Olympics could have been the official reason, but how come they were exactly in front of my balcony?

The fireworks lasted about 45 minutes, why would a sporting event be celebrated with such enormous expenditure of resources, in a suburban part of town such as ours?

When we downloaded the pictures on the PC, we saw this incredibly unique picture, I remembered the chronological order of the fireworks and the picture coincided with my thought: with this image Alcibiade gave us His reply, that he was behind the gift, but that he was not acting alone, there was also Francesco, Fabio’s Angel.

I will speak to you soon Sara, I have many things to tell you…. 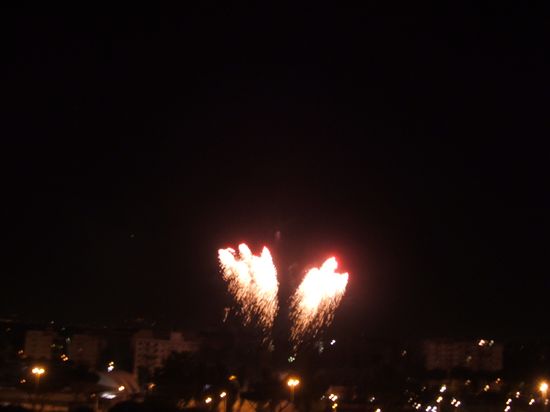 And other pictures of the some night

Choose English version in www.leparoledegliangeli.com (the words of the Angels)