The Tau of Saint Francis of Assisi : hello Sara, it’s been a long time since I wrote to you, my name is Rosalba (you may remember my email about the Baby Jesus of Prague and the one about the Madonna of Lourdes), I wanted to share, one more time, with you and your friends from your wonderful website another experience that I lived following the loss of my much beloved dog Raul.

Dear Sara, you must know that his disappearance was a traumatic event for my husband and I, we had to put him to sleep to avoid further pain following a long illness.

On that extremely sad day, to give ourselves some courage, we prayed a long time for him, and as a last gesture of love toward him, we decided, before burying him in the grave that my husband had prepared for him in our garden, to put on his neck the little necklace with the TAU of Saint Francis, that belonged to my husband and that he had been wearing for so many years. We decided that surely this great Saint would be next to him, as he is he Saint that loves animals.

Some time after his disappearance, one day, like we do every day when we go to his grave and place a little flower on it, this is what we found, this formed on the soil directly above his resting place… 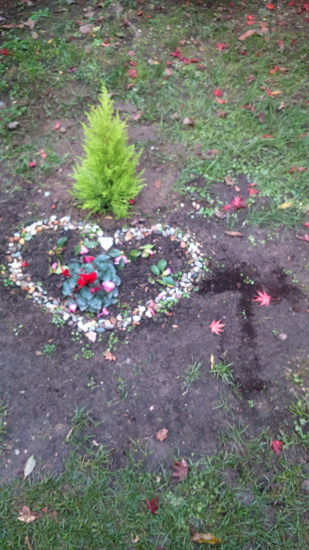 Sara, don’t you agree that the dark figure represents the shape of the TAU of Saint Francis?

We are still shocked from it, and it gives us much solace to know that Saint Francis, seeing us very sad, wanted to send us the sign that Raul is with him, and, as per our desire, will protect him always!

For those who follow us, I did a little research on internet on the TAU and Saint Francis 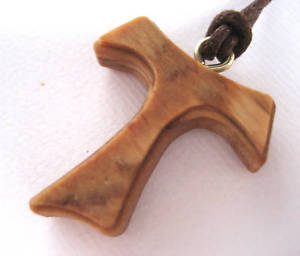 The Tau is the last letter of the Hebrew alphabet. It was adopted with symbolic meaning from the Old Covenant; in the book of Ezekiel it is mentioned already: “The Lord said: Walk through the city, in the middle of Jerusalem and sign a Tau shape on the forehead of the men who mourn and cry…” (Ex 9, 4). This is the sign that, placed on the forehead of the paupers of Israel, saved them from the extermination.

With this same meaning and value we see a mention also in the Apocalypse: “then I saw another angel that came from the east and was bearing the sign of the living God, and shouted loudly to the four angels, who were asked to damage the earth and the sea, saying: do not damage the earth or the sea, nor any plants, until we have signed on their foreheads the servants of our God” (Ap. 7,2-3)

The Tau is therefore a sign of redemption. It’s an exterior sign of the novelty of the Christian life, more internally signed by the Seal of the Holy Spirit, given to us as a gift on the day of Baptism. (Ef.1,13).

The Tau was adopted very soon by the Christians. Such sing is already on the catacombs in Rome. The first Christians adopted the Tau for a dual reason. As it was the last letter of the Hebrew alphabet, it was a prophecy of the last day and it had the same function of the Greek letter Omega, as it appears in the Apocalypse: “I am the Alpha and the Omega, the beginning and the end. To those who are thirsty I will freely give from the source of life… I am the Alpha and the Omega, the first and the last, the beginning and the end”  (Ap.21,6; 22,13).

But especially the Christians adopted the Tau because its shape reminded them of the cross, on which the Christ died to save the world.

Saint Francis of Assisi, for the same reason, referred everything to the Christ, to the Last: because of the similitude that the Tau has with the cross, he kept the Tau very dear to him, to the point where this took a very important place in his life, as well as gestures. With Saint Francis the old prophetic sign becomes more modern, takes on color, recoups its redeeming strength and expresses beauty in poverty, a fundamental element of the way of life of the Franciscan.

It was a love that came out of a passionate veneration for the holy cross, for the modesty of Christ, constant object of meditation from Francis and for the mission of the Christ that, through the cross, gave all men the most significant sign and expression of his love. The Tau, moreover, was for the Saint the concrete sign of certain redemption, the victory of good versus evil. The Love of Saint Francis for this sign was great. “Saint Francis would use this Seal to sign he sent a letter, every time he wrote either by necessity or for a charitable spirit:. (FF980) “This is how he started his actions” (FF1347). The Tau was therefore the dearest sign to Saint Francis, his seal, the revealing sing of his spiritual conviction that only in the cross of Christ reigns the redemption of every man.

The Tau is not a fetish, nor is it a simple pendant, it is the concrete sign of a Christian devotion, but especially an effort of life as a sequel to the Christ being poor and crucified.

Receiving the Tau, carrying it on your heart, is the commitment of a journey, a school of life. The Christian signed with the sign of the cross at the time of his christening, must become, bringing the cross, through the always present sufferings that life brings, imitator and follower of the Christ, poor and crucified. The Tau must remind us of a great Christian truth, our life in parallel to that of the Christ on the cross, as an irreplaceable mean of redemption.