Angelic figures images from a dream I painted

Angelic figures images : dearest Sara Luce, I am sending you the image of a dream I had a while ago, after a meditation on Angels, I later painted the images of my dream; I tried to draw exactly what I saw during the dream I had; I wanted to cement this important moment of my life, making a drawing of that dream, because it meant so much to me. 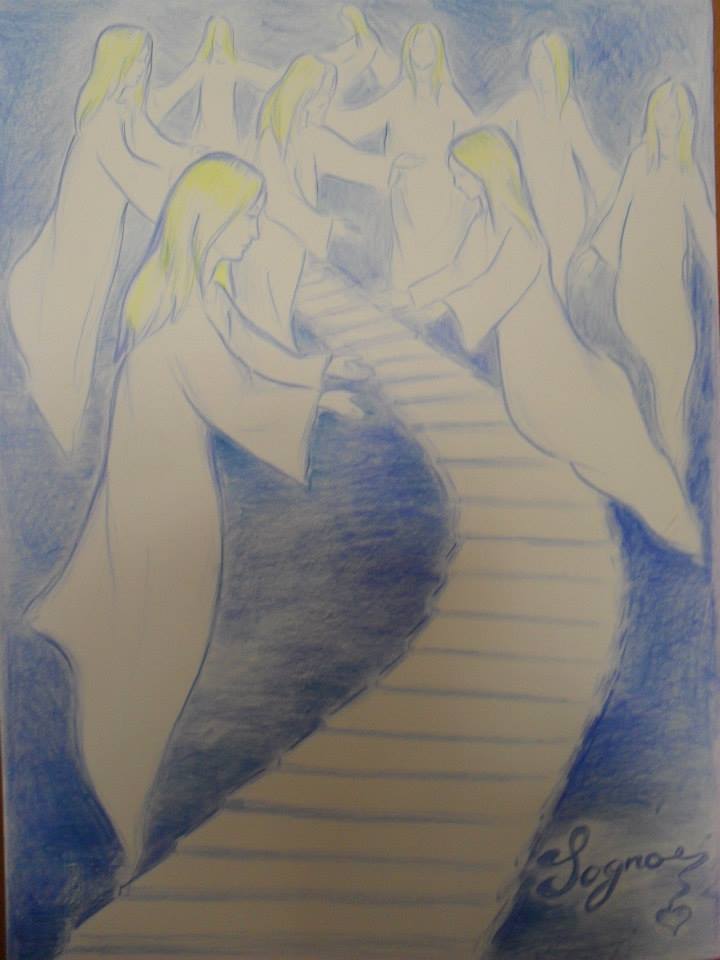 The Angels appeared like this, but their faces were only shapes, without features or details.

Dearest Sara Luce, my story began with health problems. A few years ago I fell with the flue, complicated by a bronchitis, perhaps pneumonia, which I treated myself with common antibiotics. But things got complicated: I contracted pericarditis, which left me with a chronic sporadic arythmia.

Ever since then my life changed, I immediately entered into a state of profound discomfort, fear of death. I started to look inside me, asking for help from the Sky, in particular I asked for help to my Angles. This seemed to give me comfort and faith.

I would often mentally speak to the Angels, until one night I had this dream, all white and blue: a ladder that was winding its way up in the Sky, and around it there were these angelic figures, with long straight silver hair, white tunics, but their faces had no features, only a vague shape. And this is the dream that I drew in the attachment I sent you.

I found my faith and trust in my tomorrow, even if my heart still plays up sometimes, but I no longer go into panic and I am convinced that, Up there, someone cares about me.

Thank you Sara Luce for your interest and from the comfort I receive, also from your many testimonials published on the website, which I read regularly.

Angelic figures images from a dream I painted